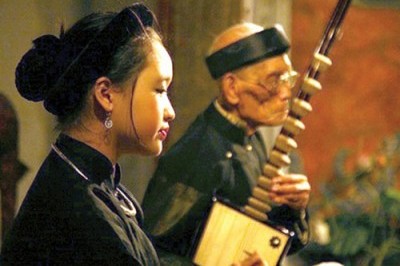 ‘A Dao’ was an actress and singer in Vietnamese ancient society like ‘Geisha’ in Japan.

A local notable went to market and saw a young beggar, who looked handsome and intelligent. His physiognomy proved that his father was a bourgeois intellectual, and his mother was a beautiful lady. His parents died. Their son was too young and helpless. He made his living by begging money. The local notable adopted him. He loved and treated him as his own son. At the age of 17 the young man was famous for literature and poetry.

On the Thanh Minh Day (Grave Cleaning Festival) (2) the young man Nguyen Ky, and the villagers went to the village temple (Dinh) where there was a theatrical performance. Everyone admired the beauty and the clear voice of an ‘a dao’. When Nguyen Ky came, the beautiful ‘a dao’ stopped singing and dancing. She looked at Nguyen Ky friendly and lovely. At the first dating she gave him gold and money so that he got rid of worries to focus on studying only. Nguyen Ky asked her name. She hid it but she let him know her last name was Dang. After that they met each other regularly. They loved each other. One day, Nguyen Ky wished to have sex with her. She got angry, saying:

“Do you think what kind of girl I am? I help you and take care of you today in the hope of having a stable life in the future. That means I help myself and take care of myself. Don’t worry to use my gold and money to prepare for your brilliant future.”

Nguyen Ky apologized to the ‘a dao’. Since then on she has had regular contacts with her boy friend to encourage him.

Nguyen Ky passed the huong thi (regional contest). He was called huong cong (BA or BS). His foster-father wanted him to have his own family. Nguyen Ky told him he would like to marry the ‘a dao’. Immediately his foster- father rejected his adventurous idea. He said:

“It’s impossible, son. You are a Confucian scholar. You can’t marry either a singer or an actress.”

Reluctantly Nguyen Ky listened to his foster-father. He married a beautiful lady in the village but he always missed the beautiful ‘a dao’. The next year he passed the ‘hoi thi’ (doctoral contest) and had a high position in the capital. Due to public services Nguyen Ky lost contact with his respectful girl friend and helper. He suffered a lot. So did the beautiful ‘a dao’. Her self-esteem was seriously hurt. Her dream was smoky. She left the place where she shared happy time with her handsome and intelligent boy friend. She didn’t cry but it rained in her heart.

Nguyen Ky’s officialdom was smooth. He was not only a Confucian scholar but also a General commanding the soldiers to repress the rebellion in Hai Duong. He was granted the highest nobility title: Quan Cong (Duke).

Duke Nguyen Ky looked for his beautiful ‘a dao’. He spent time seeking for her. Finally he found her playing harp for a band in a remote district. It was difficult for him to recognize her. She was skinny. Her beauty was eroded by time and poverty. The ‘a dao’ claimed not to know him. But the Duke recognized her through her voice and her refined words. The Duke burst into tears, those of remorse.

The ‘a dao’ told him about her ups and downs after Nguyen Ky got married. Time, sufferings, lovesickness stole her youth beauty and her attractive voice. She got poorer and poorer. She couldn’t sing. She earned her living by playing harp. Her mother was old and seriously ill but our ‘a dao’ didn’t have enough money to get medicine. Duke Nguyen Ky convinced her to go up to the capital (Thang Long- Dong Kinh- Ha Noi) to live in his castle.

“No. I have to take care of my mother. Now I am a poor harpist. I belong to the singers’ world, the lowest social class,” she said.

“Your mother is seriously ill. I promise to take care of her and of you. Don’t worry. I loved you. I respected you. You were my benefactor, who encouraged me before I passed ‘huong thi’ (regional contest). I take care of you and of your mother just to pay for the debt I owed you,” Duke Nguyen Ky said.

The old ‘a dao’ was reluctant to accept the Duke’s proposals. She was dutiful to her mother. But she was in the impossibility of taking care of her mother’s chronic disease for lack of money.

Her mother and she moved to the capital. Two years later her mother died. She left the capital for her native village, refusing to take gold and money given by the Duke.

We don’t know whether the tale was real or partly based on some real facts.

The tale didn’t give us enough details helping us guess what happened in reality. We have:

The beautiful ‘a dao’ was a native of Dich Vong village.

There are some similarities between Nguyen Ky in the tale and Pham Dinh Trong, a real VIP in the 18th Century in Bac Ha (Dang Ngoai). They both passed the ‘hoi thi’ (doctoral contest), commanded the troops to repress the rebellion in Hai Duong. Hai Duong was also Pham Dinh Trong’s native province. Dr. Pham Dinh Trong (1715 - 1754) was granted the highest title of nobility: Duke. He was Minister of Defense at the age of 37. He was described as an intelligent child at the age of 8. He was a Confucian scholar, General and Minister of Defense loved and respected by everyone. His father was a high official under the Trinh Shogunate while Nguyen Ky in the tale was an orphan.

Was Duke Nguyen Ky in the tale the modified image of Duke Pham Dinh Trong?

To a certain extent he was.

The tale reflected reaction to the Confucian concept aiming at despising the singers, actors and actresses, who were considered to be equal to the slaves. Dao Duy Tu, son of an actor, was banned from participating in the triennial contests. He became advisor to Lord Sai in Dang Trong in the 17th Century.

This tale ennobled the beautiful ‘a dao’ Dang, who was dutiful to her mother. She was intelligent when predicting Nguyen Ky’s brilliant future. She helped Nguyen Ky without expecting reciprocations. It was her pure and romantic love for handsome and intelligent Nguyen Ky.

Confucian influence was undeniable. The Duke, although rich and powerful, never forgot his benefactor. Thankfulness was one of the gentleman’s earmarks.