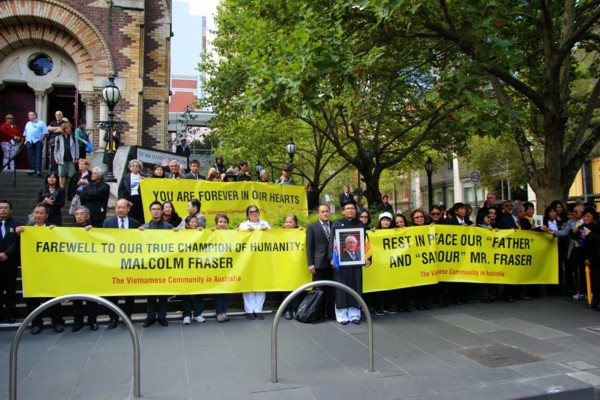 As of April 30, 1975, just over 1,000 Vietnamese lived in Australia including women who married Australians, graduate students remaining in Australia, overseas students, diplomatic officers or trainees, Catholic monastery students and orphans came to Australia during April 1975.

Except for the innocent orphans, the rest were worried about their families trapped in Vietnam.

The Whitlam government also accepted 224 Vietnamese for family reunions, religions and immigrants, bringing the total number of Vietnamese into Australia to 748 in 1975.

From Guam to Melbourne, about 40 family members of Professor Nguyễn Ngọc Truyền arrived under the family reunification classification in June 1975.

From Guam as immigrants, Sculptor Lê Thành Nhơn came with his wife and four small children in September 1975.

From Japan to Melbourne, Dr. Nguyễn Triệu Đan, former Ambassador of the Republic of Vietnam to Japan arrived with 6 other family members in mid-July 1975, Mr. Dan had to sign a document before coming to Australia to declare that he "will not get involved in politics".

"Don't get involved in politics"

On August 21, 1975, Prime Minister Whitlam was questioned by the Liberal party, admitted that nine Vietnamese were forced to sign pledging documents when they arrived in Australia that they "will not get involved in politics".

Whitlam argued that these nine persons had been all political activists or had involvement in policy making during the Republic of Vietnam period, so they could use Australia as a base to overthrow the government of a country that had been officially recognized by Australia.

Prime Minister Whitlam was criticized by the opposition party and media that the government had acted against the tradition of political freedom in Australia, discriminating against South Vietnamese people, and they demanded that he cancelled the Directive Order document, apologized to the refugees, and apologized to the Australian public.

According to Dr. Nguyễn Triệu Đan's memoirs, Australian officials said that he had held many important positions under the Republic of Vietnam, all of which were political, so if he wanted to come to Australia, he must sign the Directive Order.

Mr. Đan thought that he had worked as a South Vietnamese public servant, was not involved in politics, so he agreed to sign.

Former Senate Chairman of the Parliament of the Republic of Vietnam Mr. Trần Văn Lắm was tormented about signing the document but because he badly wanted to reunite with his family in Australia he has reluctantly signed this document.

It is known that Lawyer Lưu Tường Quang, former Director of SBS Radio, and even Mr. Đoàn Bá Cang, former Ambassador of the Republic of Vietnam to Australia before communists took control of South Vietnam, was forced to sign this pledge.

Abandoned Vietnamese staff of the Australian Embassy in Saigon

On April 20, 1975, Ambassador Geoffrey John Price sent a secret telegram to Prime Minister Whitlam informing that Saigon was losing and asked for an order to evacuate the embassy staff, Australian citizens staying in Vietnam and issuing special travel visas for those Vietnamese staff working for the Australian embassy.

On April 21, 1975, Minister for Foreign Affairs the Honourable MP Don Willesee asked Prime Minister Whitlam to issue travel visas for 115 Vietnamese including staff working for the Australian embassy and their families to prevent them from revenge attacks by the Vietnamese communists.

But contrary to the humanitarian spirit of the Australian, on April 25, 1975, Prime Minister Whitlam ordered the closure of the Embassy, evacuated all Australian staff from South Vietnam, but refused to issue travel visas, abandoning all Vietnamese staff who had been working for Australia.

According to the memoirs of Minister for Labour and Immigration Clyde Cameron, Prime Minister Whitlam held firm belief that Vietnamese refugees will become anti-communist voters hence would eventually support the Liberal party, similar to immigrants from the three Baltic States, after World War II.

In 1974, the Association had 120 members, after April 30, 1975, these students finished their study and dispersed everywhere, number of Vietnamese tertiary students fell to zero and the association officially disbanded in 1977.

Many Colombo students later became leaders and/or founding members of the Vietnamese Community in Australia.

On February 26, 1973, the Whitlam Government formally established diplomatic relations with the Hanoi regime. Many former Colombo Plan students who illegally stayed back in Australia turned against the South Vietnamese government and openly supported the Vietnamese communist regime.

According to Radio Australia, right after April 30, 1975; Nguyễn Phạm Điền, a Colombo student who came to Australia in 1962 and illegally stayed back in Australia after finishing his tertiary study, formed the pro-communist association named the Union of Vietnamese in Australia.

The number of members was only about 20 from a total of 500 students and alumni. Later, some members of this association learned that their relatives in Vietnam were imprisoned and knew a lot more about the terrible truth that was happening to millions of innocent people in Vietnam since the Hanoi regime had occupied the whole country, most of them left the “Union”. A number of them have returned back to the mainstream Free Vietnamese and became actively involved with the Vietnamese community.

In 1984, this pro-communist association changed its name to the Vietnamese Association in Australia, and Điền became its first and only president.

In the early 1990s, when I was president of the Vietnamese Community in the ACT, Điền lived there. But apart from him, I did not know anyone else who openly admitted being a member of this pro-communist association. In 1996, this association was disbanded.

Also after April 30, 1975, many leftist Australian academics established the Australia Vietnamese Society, which operated mainly in the campus of the Australian National University in Canberra, published a newsletter "Vietnam Today" in English and organized a few "Vietnam Updated" seminars.

I knew of some members of this leftist Society, including Professor David Marr and Mr. Trần Hạnh, a Colombo student of class 1972, both of whom were the editors of "Vietnam Today".

Despite being the editor of "Vietnam Today", Trần Hạnh knew very little of what was really happening in Vietnam after the war had ended.

In the interview with Radio Australia, Hạnh said it was not until the early 1980s he learned that his father, a military officer of the Republic of Vietnam Army, was imprisoned in "re-education prisons", his mother was forced to leave the city to live in “new economic zones” and his younger siblings were forced to separate from his mother by the communist regime.

In 1992, Hạnh visited Vietnam after his father had just been released from prison. Hạnh told me that his father was very upset knowing that while being sent to Australia to study with the hope that he will do good deeds for the country, he had become a communist collaborator.

Hạnh’s father was scared for Hạnh’s safety as he was constantly followed and harassed by the communist secret police force.

Thanks to that trip, Hạnh has learned a little bit about the true picture of what was happening in Vietnam.

Hạnh, at that time was studying for a Master's Degree in Communications. While visiting Vietnam, he secretly made a video film about life in Vietnam. He told me that he had secretly "sneaked" the video clip out of Vietnam and successfully brought it to Australia. The video clip was broadcasted on ABC television at that time.

Hạnh later got a job as Head of the Vietnamese Section at BBC World Service and then Executive Producer of Radio Australia.

Around the same time, David Marr told me that he had just returned from Vietnam. Before boarding the plane back to Australia, all his documents and notes recording about his trip were forcefully confiscated by the communist police at the airport.

Also in the early 1990s, after the communist Hanoi had begun to resume diplomatic relations with the United States, many members of the Australia Vietnamese Society "became disillusion" with the Vietnamese communist authorities for betraying their anti-American belief. This Society was later disbanded.

In early 1976, Dr. Nguyễn Triệu Đan received a letter from Minister for Immigration and Ethnic Affairs, Michael MacKellar, announcing the pledge "Not get involved in politics" was cancelled.

Despite the election’s loss, Whitlam was still the leader of Labor Party and continued to play the leading role of hard-line policy of preventing Vietnamese refugees from resettling in Australia.

Until December 10, 1977, when Prime Minister Fraser won the second term in office, the policy of accepting Vietnamese refugees was somewhat changed for the better.

Until July 20-21, 1979, after the Geneva Conference on Refugees and Displaced Persons in South East Asia, the Fraser Government agreed that Australia would receive tens of thousands more refugees each year.

In 1982, the Fraser Government reached an agreement with Hanoi authorities to allow the Vietnamese refugees already settled in Australia to sponsor their families trapped in Vietnam to reunite with them in Australia.

If counting the successive generations born in Australia, the number of free Vietnamese people may have reached over 300,000.

Queen Elizabeth II and Prime Minister Malcolm Fraser have indeed given birth to the Vietnamese community in Australia.

At Fraser's funeral on March 27, 2015, I and hundreds of other Vietnamese “demonstrated” in front of the Scots' church with three large banners displaying the gratitude of the Free Vietnamese toward him.

Mr. Nguyễn Thế Phong, former President of the Vietnamese Community, wore a black Vietnamese traditional long dress, with a turban on his head, hugged tight the portrait of Mr. Fraser, flanked by Australian and Vietnamese flags (yellow with three red stripes), mourning the loss of our most respected Vietnamese benefactor.

The showing of griefs of our Vietnamese community was noticed and reported by the media: the Vietnamese refugees were grateful to Mr. Fraser, the Free Vietnamese did not forget the grace of Australia that extended their love and caring hands to the Vietnamese boat people who had risked our lives fleeing the inhuman communist regime to find freedom and arrived in Australia.

The Liberal Party before April 30, 1975, had stood side by side with the South Vietnamese against the communists and then formulated policies to welcome and take care of Vietnamese refugee fleeing from persecution by the communist regime.

According to Dr. Nguyễn Triệu Đan and Dr. Nguyễn Văn Hưng, on February 10, 1976, after Prime Minister Malcolm Fraser had decided to accept political asylum seekers, they and a few students established the Vietnamese Friendly Society.

The Vietnamese Friendly Society was a predecessor of the Vietnamese Community in Victoria. At that time, the Society intended to assist the Victorian government to welcome Vietnamese refugees to settle in Australia.

For 44 years, since the establishment of the Organisation on February 10, 1976, the Executive Committees of the Vietnamese community in Victoria have always been independent of all Australian political parties but have always remembered Prime Minister Malcolm Fraser who has his special place deep in our hearts.

This is a remarkable feature of the Vietnamese community in Victoria in particular and in Australia in general.